New version of alternative firmware for ACXSynth MIDI2CV has been released.

Now you can limit polyphony in the range of 2—4 voices in Poly4 mode. Each press of the F1 key scrolls through three available values of this parameter. Available voices are mapped to corresponding number of CV/Gate outputs starting from CV1 / GATE1.

New version can be downloaded on the Project page 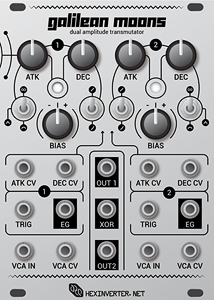 hexinverter.net announced new Eurorack module, Galilean Moons.
Galilean Moons is a dual amplitude transmutator. It transmutates the amplitude of incoming signals through the use of voltage controlled envelopes and VCAs. It is designed primarily to create voltage controlled percussive sounds when fed with a sound source (in particular, its sister module, Jupiter Storm), but can be used for all sorts of other tasks in your modular system as well as to generate typical synth sounds.

– Two voltage controlled digital functions (envelopes), each normalised to their own low-distortion linear, DC-coupled voltage controlled amplifier
– Each envelope offers percussive attack/decay, attack/sustain/release or looping (LFO) mode
– Envelopes can each be linear or exponential
– Enables a new noise output, “XOR”, if plugged into a Jupiter Storm behind the panel. (everything besides the XOR output works with or without a Jupiter Storm!)
– VCA inputs are normalised to the newly-enabled XOR and main (“I”) output of Jupiter Storm when nothing else is plugged in
– The envelopes and VCAs can be fully utilised elsewhere in your system by plugging into the corresponding function’s jacks
– Perfect for synthesizing voltage controlled percussion and other effects!