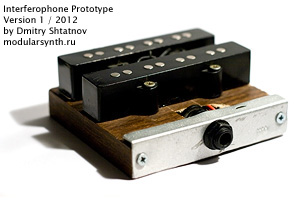 I’m glad to introduce funny device I made to get very unusual sounds. I didn’t see similar devices before, so I’d like to name it Interferophone. Actually such devices are already exist but at least, this one can be easily built from junk. Basically it is one or two general pick-ups for electric guitar or bass connected directly to stereo 1/4″ jack socket. (You can click on the illustration to see device closer) As may be understood from it’s name, this device is intended to pick up and record ambient electro-magnetic interference to stationary or portable recorder. The range of EMI emitting devices are very wide these days: Cell phones, computers, printers, camera, motors, plasma balls, disk drives, remote controls and many others, Almost every electronic device causing fluctuations of the magnetic field during work. Occasionly we can hear some of these sounds quietly from power sources or cheap audio-chipsets used on laptops and low-end pocket audio-players.
Here is a sample of EMI emitted by pocket mediaplayer during startup and shutdown.
player_startup_shutdown

Magnetic pickups not only catches interference, but can work in true bin-aural field if placed in the right way. In the next sample you can hear rotation of the Interferophone between identical computer fans.
rotary_fans

The quality and volume of sound you got with Interferophone depends on intensity of the EMI source and quality of used pre-amp because signal is still very weak. Though sometimes you can get sound similar to quality audio oscillator.
drone_detuned_fans

Modern world is filled with various digital devices, bringing concept of the electro-magnetic ambient: The noise uttered not by nature and living objects but by artificial objects. Let’s hear an example of such complex noise: the EMI of the HP EVA hard-disk array drive.