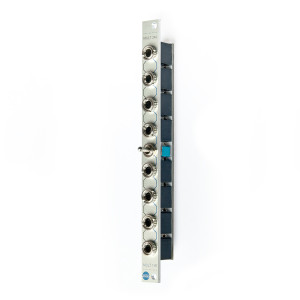 The SSSR Labs Mult 2×4 is a passive multiple module having switchable configuration: 2×4 or 1×8. This module has the smallest possible width: only 2hp, which perfectly allows it to fit yet another gap in a modular synthesizer with useful function.

And now appeared modules that are intended to be programmed by owners. The first one was utility-module Expert Sleepers Disting ($175), based on PIC32MX uC, then Circuit Abbey Euro-Duino ($145), based on Arduino as it comes from the name. The price for the DIY kit of this module is just $95 and it has lots of fun within! So, let’s take a closer look at the module.
END_OF_DOCUMENT_TOKEN_TO_BE_REPLACED

High-tech eurorack module Matrix Mixer by latvian company Erica Synths should appear by the end of July. Module is a hybrid matrix DC-mixer, controlled with 3.2″ touchscreen. Analog part consists of 10 DC-coupled inputs and 8 DC-coupled outputs. The main interface resembles 10×8 Synthi-style matrix with virtual pins, controlled by touches. This pins connect respective input and output with unity gain. it is possible to store up to 256 patches — individual settings, and to create a performances — chains of settings, which can be succeeded by single or pre-defined serie of pulses passed to Clock input.

The price is unknown at the moment.

New version of firmware for ACXSynth MIDI2CV has been released. Firmware is no more alternative. Second run of hexinverter.net MIDI2CV comes with this version. New manual is published. Changes:

Firmware update and the source code can be downloaded on the Project page.

New version of alternative firmware for ACXSynth MIDI2CV has been released. Changes:

New version can be downloaded on the Project page

Thanks to all donators!

Belarusian electronics designer Alexey Laman manufactures Eurorack modules under L-1 trademark. His modules are highlighted both by himself and by community members as top-quality modules comparable to Cwejman products. The Company is founded in 2012. Today’s model range includes several dynamic effects (compressor, VCA, mixers), VCF and even vocoder! Modules can be purchased as fully-assembled units or as DIY-kits. In this review I’m going to introduce three L-1 modules at once: 2180VCF, Quad VCA/Mixer and Tube VCA. END_OF_DOCUMENT_TOKEN_TO_BE_REPLACED

New version of alternative firmware for ACXSynth MIDI2CV has been released. Changes (from v. 5.5):

The first key pressed at Split mode channel defines split point (the most lower key of the upper zone). Lower zone goes to voice 1 and upper zone goes to voice 2. Split point is set each time when multitimbral mode is selected. Intellectual duophonic mode can be used with two identical voices. Converter analyzes each newly pressed key and assigns corresponding note to particular voice where most closer note was taken previously. This makes it possible to play douphonic parts with glide with no unwanted slew between the parts if there is sufficient space between the hands. This mode doesn’t require fixed split point, but there is no binding between voices and parts like in the split mode. When monophonic part is played, only one voice will be used, there is no unison! New version can be downloaded on the Project page

Thanks to all donators! I mean it, thank you, guys! I’m glad to create as perfect code and design as I can. 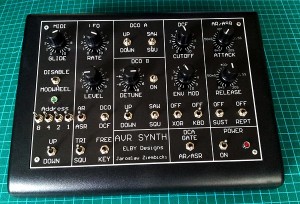 Last time I was telling about one Elby Designs module. So, let’s continue the Australian equipment subject with interesting product manufactured under same brand; AVR Synth. This is the virtual analog synthesizer working on AVR-family microcontroller. The firmware of this synthesizer is written in Assembly language. The code is open-source and schematic is also open. I’m going to tell about the original, 16-bit version and about few forks of this project.

END_OF_DOCUMENT_TOKEN_TO_BE_REPLACED 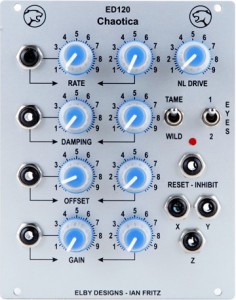 Ian Fritz is known as developer of electronic circuits which utilise the Chaos Theory. One of these circuits that is called Chaotica, can be purchased from Elby Designs as assembled Eurorack module Panther ED120 or as DIY kit. The Chaotica is a third-order chaotic system with extensive voltage control. END_OF_DOCUMENT_TOKEN_TO_BE_REPLACED